A short history of Dornoch Cathedral 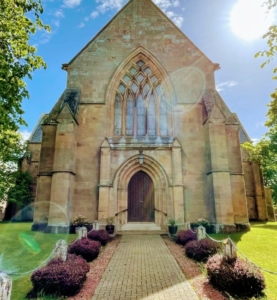 We have a group of volunteers to welcome visitors to the Cathedral in the summer. Welcome Tables are there from the beginning of June till the end of August from 10am to 4pm, Monday to Friday.  We try our best to answer your questions and give you an insight into our lovely church.  The Cathedral is open to visit in winter during daylight hours where information in several  languages are available.

Here is a snapshot of the history of Dornoch Cathedral through the ages.

In 1222, Gilbert de Moravia, a relation of the Earls of Moray and the first Earl of Sutherland, was elected to Bishopric of Caithness. The seat of the diocese of Caithness was originally at Halkirk, but owing to the brutal murder at this location of the two bishops who proceeded Gilbert, his first decision was to transfer the seat of the diocese to Dornoch; here Gilbert built Dornoch Cathedral at his own expense. It is uncertain how long it took to fully complete the Cathedral, but by 1239 the building was far enough along for the first service to be held. Gilbert died in 1245. He was later recognised as “one of the noblest and wisest ecclesiastics the mediaeval church produced” and was the last Scotsman to whom a place was given in the Calendar of Saints.

From the time of its completion until the Reformation some 340 years later, Gilbert’s Cathedral stood in its original state. In 1570 it was set on fire and Gilbert’s tomb was desecrated during a clan feud between the Murrays of Dornoch and the Mackays of Strathnaver. Almost totally destroyed, except for the chancel and transept walls, the Cathedral was partially restored in 1616 by Sir Robert Gordon. Between 1835 and 1837, through the generosity of Elizabeth, Duchess-Countess of Sutherland, the restoration was completed and the Sutherland burial vault, which is now sealed off, was built under the chancel floor.

The Cathedral has many other interesting features: on the outside of the Cathedral, gargoyles have been set in the eaves. At one time they were thought to be evil spirits which the ringing of the tower bells had driven from the Cathedral and turned to stone. Of interest inside the Cathedral is the piscina, a small basin from which a pipe leads to the cem

etery outside. Any wine remaining after the Catholic mass would have been poured into the piscina (after the reformation, Dornoch was no longer a Roman Catholic church – the name “Cathedral”, which means seat of a bishop, has been retained as a reminder of the church’s history). Also of interest, especially to Americans, are the stained glass windows on the north side of the chancel. These windows were donated in memory of Andrew Carnegie, who was born in Dumfermline and often summered at his estate Skibo, located four miles from Dornoch. The three windows represent music, peace and literacy, three of Carnegie’s concerns.